Even back in 2009, which is a good seven years ago, Thailand has already been promulgating a new system of office workspace for the future. For most companies back then (and even now) property remains the second largest fixed expense.

However, a 2009 study suggests that as much as 50% of corporate office space goes unused at any one time, making them wasteful expenses that aren't fulfilling their full potential as capital investments. Such a waste of resources should not remain unchallenged in 2009's challenging economic climate as well as 2016's persisting economic slump.

The State of Workspaces in Thailand in the Past

Prime office rentals in Bangkok in 2009 stood at THB 700 per square meter or PSM per month, based on a report by CB Richard Ellis. Prices were expected to bottom out by 2009's end, marking an ascent as the global economy recovers from hopeful speculators.

However, recovery from the 2008 economic crash was glacial, to say the least, to the point that we are still experiencing its effects eight years later.  Furthermore, there are overheads for human support, equipment, and utilities to be considered on top of office rental expenses.

Every hour that an office space remains unoccupied, funds for natural, human, and financial resources end up being inefficiently used. This was true back in 2009, and it remains true in 2016. At any rate, it is not 2009 anymore and the future to utilize office space is now.

Efficient Use of Workspaces in the Present

Even workers who spend the majority of their day in an office building might still spend hours daily away from their workstations. However, technology has become advanced enough to minimize your investment and maximize your output in the form of serviced and virtual offices from multinational facility management companies like Servcorp.

The workstation of the future is everywhere. In Thailand, more and more companies are aiming to increase their cost-effectiveness when using real estate efficiently by creating more flexible systems that give office-based employees new options for when and where they work. For example, in the virtual office setting, you can work anywhere and anytime as long as you are connected online.

Serviced office rental makes sense and cents. Serviced offices are considered Thailand's present and future workspace because they provide Thai small to medium businesses (SMBs) with fully equipped offices to rent and use as required rather than as a permanent office fixture that they have to furnish and put supplies into themselves. The savings they get from this setup is huge.

Moreover, the nature of work has changed. As technology advances, so too does the nature of work. Once upon a time, in the 19th Century to the early 20th Century, people had no concept of weekend breaks. Meanwhile, in the 21st Century, within just 16 years economies have shifted from industry-based, labor-intensive work to knowledge-based, service-intensive work due to the possibilities present technology has unlocked.

The Future of Thailand Workspaces Is Collaborative and Pay-Per-Use

Just as software can now be accessed in the cloud, so too can virtualized companies can work pretty much anywhere with a device connected to the Internet (such that even major disasters like the Thailand flood will not necessarily cripple these businesses).

Everything is run more efficiently because every last bit of baht is used to its utmost potential on a pay-per-use system of collaboration and communication. Even in more labor-intensive industrial industries, it pays to have a virtual or serviced workspace that makes full efficient use of your company capital, especially if you are an SMB.

Servcorp is a huge supporter of the future of Thai SMB workplaces. It offers high-quality virtual office and serviced offices that significantly reduce the overhead expenses of startup enterprises. For more information about Servcorp offices, please call +66 2 231 8100. 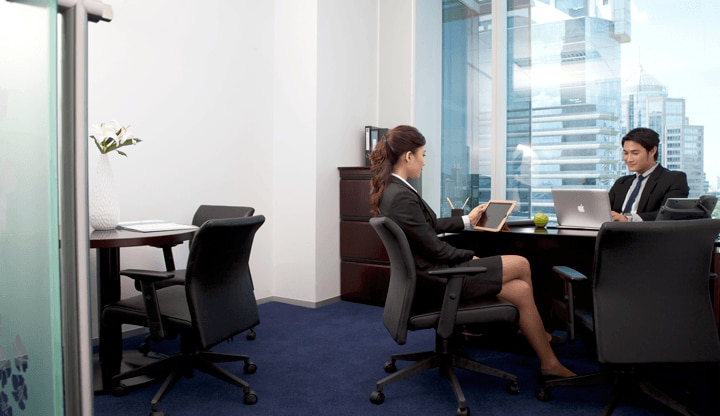